It was April 27th,1979, just outside of the Lisbon airport.  I didn’t know it at the time, but this picture was taken on the very last day that I was 100% Portuguese. ( That’s me in the little white suit on the left) My parents, Valdemar and Teresa, still in their 20s took this huge leap of faith and decided to immigrate to Canada.

The problem is that when they got here with just a couple of suitcases to go with the couple of kids, ( my sister and I), it was smack dab in the middle of a terrible recession.

There were no jobs and little prospects, especially for immigrants who didn’t fluently speak English.

My parents did try to go to night school, but with the way the economy was, and little mouths to feed,  those classes sadly short lived. They had to work… and work HARD…  work like they had never worked in their lives…

At one very low point, they were working all day and most of the night, with very little hours of sleep between jobs. One particularly grueling job they both had (out of pure desperation and grit)  was picking worms at night to sell to fishermen. The children of the workers would sleep in their vehicles in a small parking lot near a fresh field while a watchman would ‘keep an eye out’. They would spend hours bent over with lanterns on their heads scouring the evening dew to look for worms to fill their buckets to send to local fishermen. It was back breaking, exhausting labour for very little recompense.

For my sister and I, in our innocence, it was fun sleeping in the car, and sneaking into our friends’ vehicles in the middle of the night while trying to fool our night guard. But the mirth was short lived as we always grew cold and tired. And although we couldn’t name it, the looming sense of guilt always set in when we would see the weary faces of our parents trudging back exhausted and spent.

Then, during the day, my mom would go to work at a factory that made tubes for cars and my dad would work construction. It was a brutal and difficult time for our family.

By the age of 9, I was a pretty resourceful latch key kid with an already stacked resume of babysitting experience as I would often take care of my sister and then newly added brother, ( he was the first Canadian in the family who came along in 1982.)

I slowly became a ‘3rd culture kid’ . I wasn’t quite Portuguese anymore. I certainly didn’t feel Canadian.. I was somewhere in the middle. No man’s land. The diaspora desert.

But one thing I did understand and relate well to was other immigrant children. In fact, in the building where we first lived was filled with immigrants from around the world.

I used to love going to their homes and smelling the different foods, observing the way they did everything to hold on to their cultures and were so proud to share.

My mother used to say that my birthday parties were like the meeting of United Nations as there were so many cultures represented.

My parents, like the others, also held on to their culture in our household. They spoke only Portuguese at home and made sure that we knew where we came from. We would spend weekends visiting other Portuguese families and attend cultural events. The pride and loyalty was tangible wherever we went.  The struggles were real, but the sheer grit and perseverance to work hard and overcome was so much stronger. Tears and lament were allowed for but a brief moment, and then jaws were set, sleeves were rolled and giving up was never an option!

My father was the epitome of fortitude… but he struggled to assimilate to his new land. He wore his Portuguese heart as a badge of honour. Every time he talked of his country, he would touch his chest and a look of such longing would over take his features, that we would just sit very still so as to not shatter his reverie.

He always told us stories of ‘the old days’,  used the ‘old remedies’ when we were sick and often referred to ‘wisdom of the ancients’ when dealing with conflict or curiousity.

Sometimes, when he was not very tired, he would pull out his harmonica, and play merry little tunes as we danced around the kitchen. ( I still love dancing in the kitchen) Then, we would hear the stories of how the village girls would dance around him in a circle as the boys sat and watched their twirling smiles and skirts.

We would be sent ( most of the time on our own, like Paddington Bear with little tags around our necks) to Portugal, every other summer to spend the entirety of it there with extended family.

These summers are what solidified my immense love for my country.

Even though I spoke with an accent and our days were numbered, I felt truly whole, completely accepted and at peace in those months there.

I was free.. to be a child, to not worry, or have grown up responsibilities,  but just enjoy the wonder of just being a little girl. 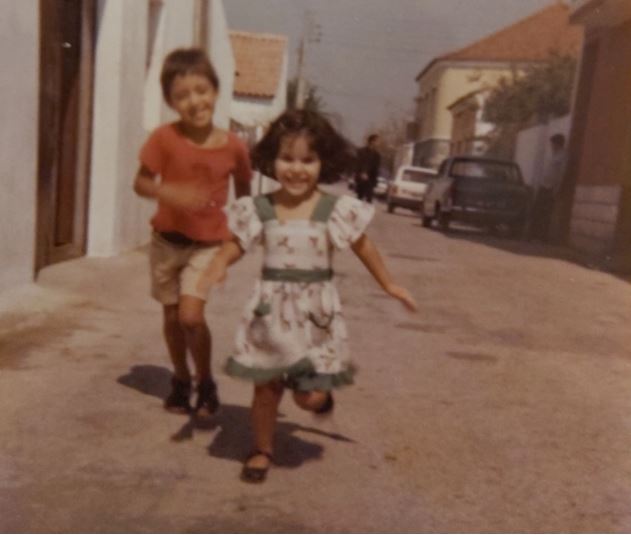 I have particularly vivid memories of the summer evenings in the village I was born in and my grandparents lived.

It would be after supper and the ‘tela-novela’ of season had played. All of the children would be allowed out to play in the street. Mothers and Grandmothers would be sitting at their windows and balconies while fathers and grandfathers were watching the latest soccer game on café patios…Neighbourhood Watch was in full effect!

We were safe and protected to just be as children should be, without fear or hesitation, the streets was our playground.

We would play hide and seek running up the cobblestone streets and then would go for ice cream at the local café. We would sit together in a large jolly group on a random set of stone steps as the village cats roamed freely around us.

Then we would wash our hands and faces in the fresh mountain spring water fountains that were found in pretty little corners of the village  and then quickly embark on the next adventure and story to be made in all the merriment youth can inspire!

There was one major rule. When the clock would strike 12, just like Cinderella, you had to be home before the last toll. It really was like something out of a film.

I remember so clearly, the church bell ringing and all of the village children running and laughing to their homes, shouting out instructions for next day’s rendezvous and then taking their parents places at the window to share some more until the scolding to shut the blinds and go to sleep came from below.

I had a little ritual that no one knew about. It happened every time we would leave the village on the last day to go back to Lisbon to catch the flight to Canada. I would run outside while everyone was preoccupied with luggage and travel preparation.

I would kneel down and while making sure no one was watching, I would kiss one of the cobblestones closest to my grandparents house. I would make the same silent solemn vow… ‘ I love you my Portugal, I will be back’

It didn’t matter if I was 6 or 16, I was never embarrassed by my secret little tradition.. (my grandmother would have been mortified ) but in my mind those cobblestone streets were pure gold.

There is this Portuguese word that has no translation in English. ‘Saudade’

It describes a deep melancholy yearning, a nostalgic longing, a quiet reverie to be near something or someone that is distant …  for the past, one’s country, old loves, and happier days.

This is what I have felt all my life. Saudade.

This is what every immigrant feels.. and the sentiment is passed down to their children, although they may not understand why or what it is exactly that their hearts desire, the longing is there, permanently.

So I decided to create something that tries to encapsulate that. It is a children’s book, because maybe that is the perspective I will always have  for my country, a childlike wonder and innocent yet fierce devotion.

The dual narrative story line and the illustrations, ( currently being created by the incredibly talented Portuguese illustrator  Joana Félix Mink) are meant to capture the longing, the reverie, the patriotism, and also the immigrant journey.  Every page begins with a question that every immigrant has asked themselves… ‘Who am I?

This is a story that celebrates proud and noble people who despite their immigrant struggles, push on and persevere.

A story that celebrates a vibrant and rich culture and heritage, filled with history, literature, art, music, poetry… a little country that boasts breathtaking beauty in every region.

And all of it, in honour of my phenomenally resilient and inspiring parents, as well as all the  the phenomenal hardworking Portuguese immigrants across the globe. Those who are often forgotten or overlooked and yet have  beautiful stories to tell.

I kiss the cobblestones as I humbly present this little gift of a book in return to my precious homeland, and know I will always be Portugal’s Daughter. 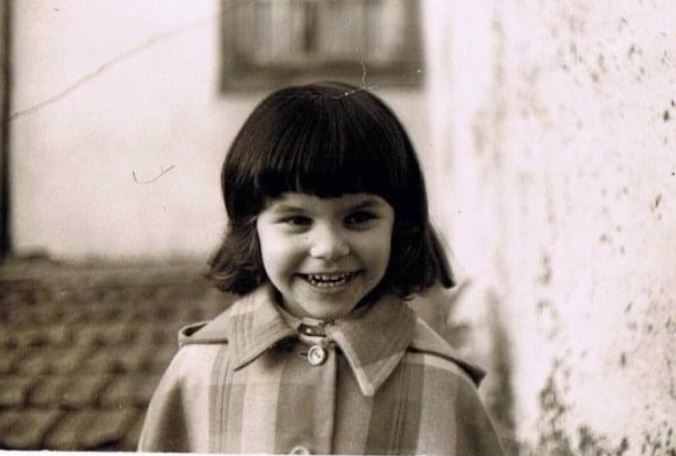 The Cultural References in Portugal’s Daughter

Fighting Back! The Backstory of My Crowning Glory

We use cookies on our website to give you the most relevant experience by remembering your preferences and repeat visits. Click “Accept” to consent.Cookie SettingsAccept
Manage consent

This website uses cookies to improve your experience while you navigate through the website. Out of these, the cookies that are categorized as necessary are stored on your browser as they are essential for the working of basic functionalities of the website. We also use third-party cookies that help us analyze and understand how you use this website. These cookies will be stored in your browser only with your consent. You also have the option to opt-out of these cookies. But opting out of some of these cookies may affect your browsing experience.
Necessary Always Enabled
Necessary cookies are absolutely essential for the website to function properly. These cookies ensure basic functionalities and security features of the website, anonymously.
Functional
Functional cookies help to perform certain functionalities like sharing the content of the website on social media platforms, collect feedbacks, and other third-party features.
Performance
Performance cookies are used to understand and analyze the key performance indexes of the website which helps in delivering a better user experience for the visitors.
Analytics
Analytical cookies are used to understand how visitors interact with the website. These cookies help provide information on metrics the number of visitors, bounce rate, traffic source, etc.
Advertisement
Advertisement cookies are used to provide visitors with relevant ads and marketing campaigns. These cookies track visitors across websites and collect information to provide customized ads.
Others
Other uncategorized cookies are those that are being analyzed and have not been classified into a category as yet.
SAVE & ACCEPT
error: Content is protected